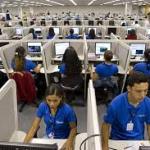 If you read my rants you’re certainly familiar with my short temper and sarcasm which is probably what you enjoy most from these posts. But if you were a telemarketer you’d definitely feel different. I used to keep a police whistle near my desk and blow all my frustrations into the phone receiver. But then I read that a man was sued by a telemarketer for blowing his eardrum out. Whoops. So now I use other tactics – like speaking Japanese (I don’t know any Japanese). One guy started screaming into the phone, “IS THERE ANYONE THERE THAT SPEAKS ENGLISH!” I simply paused for a long moment and replied, “Mogata.” True story. In fact, I just looked it up and Mogata is really a Swedish municipality. But with the right inflection it can sound Japanese.

Like many of you, this past month my voice mail was full with recorded messages from politicians. No room for play with recorded messages. But there were so many of them I finally turned my ringer off and let the machine get all calls. And I think I’ll keep it that way. After all, who answers their house phone? Isn’t that reserved for faxes and alarm systems? 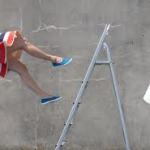 What I really hate is the “smart” recorded message that understands what you’re saying and responds accordingly. The Siri of telemarketing. “Is this a machine?” Response, “No, I’m a real person and I want to tell you about an incredible opportunity…” These guys just annoy me. I much prefer the folks that can respond to my rage. Like the woman who got me off a ladder, not once, but three times. She called me back twice to tell me she would PRAY for me. I have to admit, I was a little mean to her — but she got me off a ladder THREE times! Normally I answer these calls with great enthusiasm and say something like, “Oh Susan! I’ve been waiting for your call. I can’t wait to purchase whatever you’re selling today. Are you going to save me a fortune on my merchant service fees? Or is it time to service my air conditioner?” Then I lay the phone down and let her babble until she gives up. 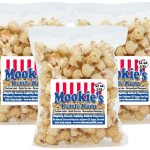 As a local business in Clearwater, I get several calls to donate money to our neighborhood High School. Why do I need to donate to my public high school? Aren’t public schools funded by the taxes we pay? And these call come from a telemarketing company in Texas. That amazes me since schools have an unlimited, free, work pool called students. But instead of arguing with them I tell them to try Mookie’s Fundraising Packages instead of begging for money like a vagrant. But that information never goes further than the telemarketer who simply hangs up and tries again.

We also like to share our fundraising program with the youth organizations that are constantly standing in front of our local Walmart begging for donations. What lesson are we sending our kids? If you stand on the corner with your hand out people will give you money. I don’t think that’s good. It works — but I just don’t think it’s good — for anyone involved. Sell something. Sing. Dance. Something.

Back in the 80s when I worked in downtown Philadelphia, I would get off the train and step over this woman who said something like, “Got any change? Help a sista out?” Well, I hated the train, I hated the city, I hated the noise and I’m not pleasant in the morning so I would bark, “I’M NOT YOUR SISTA! MY SISTA HAS A JOB.” But on some mornings a shabby dressed man wearing wire frame glasses (with no glass in them) would hold open the door of Suburban Station with his cup in hand and a warm smile and he’d simply say, “Good morning!” He was offering a service. He brightened my day. He made me smile — in the morning! And he held the door for me as I fumbled with my bags and breakfast so I would gladly give him the change from my soft pretzel and coffee.

And I will always support the Girl Scouts with their overpriced, delicious cookies. At least they teach the girls commerce and competition and prepare them for the workforce instead of teaching them to compete for the ‘good intersection’ with a effective vagrant sign. However, I guess a well written street sign could be considering a marketing strategy.

Speaking of vagrant signs, the one pictured here was taken in Philadelphia on New Year’s Day in the midst of animated crowd enjoying the Mummers Parade. It reads: “Family captured by Ninjas. Need $$ for karate lessons.” Very creative. But the best sign I ever saw was in Clearwater FL on US 19. A very tan, deeply wrinkled, long haired man sat in the median on a very hot day with a sign that read, “Why lie. I need beer.” And as I sat at the traffic light smiling a pickup truck full of laborers beeped their horn and threw him a cold one and he gulped it down in one swoop. You just can’t make this stuff up. 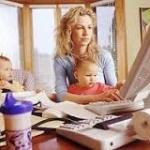 Back to the matter at hand. When I picture a telemarketer I envision them in a room full of cubicles and can often hear a lot of chatter in the background but now a days these people are hired to work from their home and it’s not unusual to hear a dog barking or a child screaming. Or perhaps they’re lounging comfortably in their PJs and fuzzy slippers. I feel sorry for the people who can’t find work or are housebound and have to resort to interrupting the working people to make a living. And I should be more compassionate about their situation. But when I’m in the middle of my busy day and I’m juggling umpteen things at once it’s hard to feel compassion. A polite, “no thank you, I’m not interested” just never seems to roll off my tongue. And even with the National Do Not Call List I doubt telemarketing will never stop because after all, “they’re not trying to sell me anything.” So I think the answer for me is to simply keep my ringer off. Hand out my home number on every form I fill out. And I’ll never be forced off my ladder again.

Wow, editing this rant just sparked a deep seeded memory. When we were in high school me and all my girlfriends got a job making calls to raise money for multiple sclerosis. We were all horrible at it – we couldn’t even pronounce it. But our friend Colleen had the tenacity or the charm it took to get the job done. So Colleen would finish making all our quotas so we could leave early and go to the corner bar to buy a six pack (for 6 of us). But one of the girls had aunts that hung out in the Blue Room so if we happen to run into Aunt Gookie and Aunt Nino we’d say we had to use the restroom (even though our office was 2 doors down and fully equipped with bathroom facilities but what did they know after a few high balls). If the coast was clear it was, “6 pack of Coors Light please.”  Again, Colleen was our confident looking adult. Ah the 70s – when the drinking age was only 18.

If only we had Mookie’s Fundraising Packages back then! We all would’ve blown past our quotas.

Born and raised near Philadelphia makes Fran a bit -- edgy. She moved to Clearwater FL in 1996 after a 3 foot snowfall drove her outta town. Bought a small house on Wilson Drive and soon met Mark Wilson (aka Mookie) and started their popcorn empire. Between Mookie's marketing genius and Fran's creative 'edge' their business quickly grew legs. In 2009 they discovered the wonderful little town of Banner Elk NC and realized they could beat the hot Florida summer by working in the cool mountains and now they have the best of both worlds.
View all posts by Fran Wilson →
Fran’s Rant: Bills
Mookie’s Rant: Christmas