To the woman who disrupted our business and screamed at me insisting that our popcorn could not possibly be non-GMO, I invite you view the attached letter from our supplier and I urge you to stop fighting with little guys like us.  Your fight is with Monsanto and our government that allows giants like Monsanto to exist instead of letting the small responsible farmers thrive.

For those of you who aren’t familiar with the term GMO it stands for Genetically Modified Organism and apparently it’s the new hot topic for people to fight about. 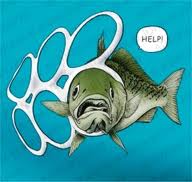 When I was a kid they told us the plastic 6-pack rings were choking the poor fish and they urged everyone to cut up their 6-pack rings before disposing of them. How ridiculous is this?!? If I throw something away that is picked up by my disposal company, shouldn’t it go to landfill? So how does this impact the fish in the ocean? If we’re dumping our trash in the ocean we’d have bigger problems than fish being strangled by 6-pack rings.

NOW the big culprit are those horrible plastic bags you get at the grocery stores that are ruining our planet!!! And you MUST use reusable totes that any retailer will be happy to SELL you. Hmmm. Keep in mind — it’s not the plastic bag you use for your your broccoli that’s bad. Or the one you use for your apples, celery, lettuce, or onions.  Or the plastic that covers your meat, fish, and poultry. Or the plastic liners in your cereal and cracker boxes (I could go on forever with every plastic item in the store). It’s ONLY the plastic bag at the checkout counter that’s ruining our planet.  And YOU’RE responsible. Who’s buying this BS?

We all get roped in by media hype. I’m guilty as well. In fact, I took a short trip down a raw food road one week and ended up at — get this — a raw food cooking class. Now raw food and cooking shouldn’t be used in the same sentence. And anyone that knows me is fully aware that I don’t cook. Nonetheless, here I am, parking my work truck in a sea of small, sensible, smart cars. So right off the bat, I’m the heathen in the room.

THEN, they went on to discuss a study where they said: “I love you” to a glass of water and claimed it was healthier water than the glass of water they were mean to!!! How I made it through the first 10 minutes of this class is beyond me but after they were done making salad (after all, it WAS a beginners class) they projected a slide balking about how important it is to use re-usable grocery bags and showed a picture of fish being choked by our plastic grocery bags (just in case you missed the 6-pack ring fiasco in the 70s) and they urged us to be conscientious and responsible by using tote bags. My tongue was bleeding from biting it and I finally stood up and said, “Hold on a minute. Why do only the innocent plastic shopping bags get this bad rap when I sat here and watched you use 15 pairs of disposable plastic gloves while you chopped a mountain of veggies that you pulled out of umpteen plastic ziplock bags. You served me with disposable paper plates coated in plastic – but I can’t use a plastic grocery bag because I’m ruining the planet??? And hey, wait a minute, what’s that lining your trash can? Ooh – is that a plastic bag? I line my cans with reused grocery bags!!!” When the instructor escorted me to the door she whispered in my ear, “Fran, I just want you to know that I didn’t buy those zip lock bags.  Someone gave them to my mother and I was just trying to use them up.” UGH!!! Is there no end to the madness?!? 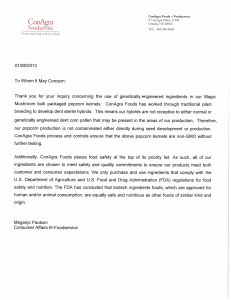 Back to the matter at hand. I’m not sure how much truth is behind the GMO hype.  Aren’t we all genetically modified?  I’m a full blooded Italian (as you might have guessed from my rants) but my parents were not related and they made me which makes me genetically modified.  So are Monsanto’s genetically modified seeds actually going to kill us? Or is this just another distraction our government uses to make us fight among ourselves so we don’t pay attention to what they’re really doing to our food supply? But while we wait to see how this plays out here’s a copy of my popcorn supplier’s letter stating their innocence.

And if you have any issue with the sensitive subject I’ve raised here please don’t fight with me about it. This is simply my opinion. We do everything we can to make the best popcorn possible AND to keep our customers safe and happy.  But if you want to fight with Monsanto here are some links to get you started:

Born and raised near Philadelphia makes Fran a bit -- edgy. She moved to Clearwater FL in 1996 after a 3 foot snowfall drove her outta town. Bought a small house on Wilson Drive and soon met Mark Wilson (aka Mookie) and started their popcorn empire. Between Mookie's marketing genius and Fran's creative 'edge' their business quickly grew legs. In 2009 they discovered the wonderful little town of Banner Elk NC and realized they could beat the hot Florida summer by working in the cool mountains and now they have the best of both worlds.
View all posts by Fran Wilson →
My Dad
This myocardial infarction is bought to you by AT&T